For months, Jay Powell and the Federal Reserve have offered a wary, downbeat assessment of the US economy’s ability to recover from the pandemic, but this week they embraced a much rosier outlook and predicted a burst of economic activity this year.

The Fed’s optimism, driven by the accelerating vaccination rollout and Joe Biden’s $1.9tn fiscal stimulus, has raised hopes that the US can quickly recover ground lost during the coronavirus crisis and usher in a new era of economic momentum.

The upwardly revised median forecast from Fed officials, released on Wednesday, projects that output will surge by 6.5 per cent this year — the fastest pace since 1984, when Ronald Reagan was president.

Unemployment is predicted to fall to 4.5 per cent by the end of the year and there is stronger inflation in sight, with core personal consumption expenditure, the central bank’s preferred measure, rising above its target to 2.2 per cent.

“Everything is pointing to a handful of quarters of pretty darn fast economic growth,” said Wendy Edelberg, director of the Hamilton Project and a senior fellow at the Brookings Institution.

“We have a lot of economic activity that’s been postponed, and a huge amount of pent up demand for face-to-face services, and we’re going to see a surge in that kind of spending.”

But for all the enthusiasm about the sharp economic acceleration that is starting to unfold, especially in sectors such as travel and hospitality and leisure, the Fed is far less certain of a long-lasting boom in the years to come. That explains why its top officials are so reluctant to even hint at removing monetary support for the recovery.

US central bankers are still concerned about a potential relapse in the fight against the virus, see fiscal support from the stimulus starting to fade next year, and worry that the labour market will continue to struggle.

The Fed forecasts that growth will slow significantly after this year to 3.3 per cent in 2022 and 2.2 per cent in 2023. And despite fears of a dangerous spike in inflation among some economists, the central bank sees nothing of the sort. Even with interest rates close to zero, core PCE inflation will fall back to 2 per cent next year and 2.1 per cent in 2023, according to the forecast. 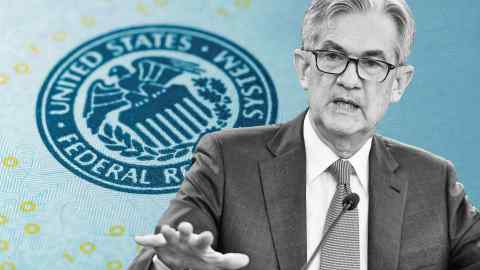 “A reflation on the reopening of the economy is very unlikely to be sustained. Airfares are going to go up, but they’re not going to keep going up year after year. It’s very much a transitory thing,” said Laura Rosner-Warburton, a senior economist at MacroPolicy Perspectives.

She added: “The fiscal stimulus is a one-time sugar rush. It’s big — but it’s still a one-time package; one set of cheques is going out. And after that, we’ll go back to fundamentals.”

While very large by historical standards, the 6.5 per cent growth forecast has to be put in the context of the last year’s 3.5 per cent contraction.

But it is nevertheless significant. In June 2020, when Fed officials were predicting a deeper contraction in the economy of 6.5 per cent last year, they also forecast a smaller rebound of 5 per cent in 2021.

“It’s a bounceback, but it’s a pretty good bounceback,” said Joseph Gagnon, a senior fellow at the Peterson Institute for International Economics.

During his press conference on Wednesday, Powell made clear that he was very confident of a short-term burst this year. “As the economy reopens, will start spending more. You can only go out to dinner once per night, but a lot of people can go out to dinner,” he said.

But Powell has not embraced this as a fundamental shift, saying “some social distancing” might linger and pre-pandemic employment levels could be very difficult to bring back: “It’s just a lot of people who need to get back to work and it’s not going to happen overnight, it’s going to take some time. No matter how well the economy performs.”

The risk that the pandemic could surge again still worries Powell. “We’re clearly on a good path with cases coming down . . . but we’re not done and I’d hate to see us take our eye off the ball before we actually finished the job”, he said on Wednesday.

If the vaccines really do work, I think we could get a better outcome than the Fed is forecasting

Still, in the short-term, things are undoubtedly looking up. Rosner-Warburton of MacroPolicy pointed to improving conditions beyond consumer spending driven by stimulus cheques: “It is also a housing market that has been on fire . . . the goods sector, the manufacturing sector that has recovered very quickly from Covid.”

Gagnon of the Peterson Institute said that even with the hefty upgrades to its economic forecasts, the Fed might still be too cautious and that there is “upside risk” to its projections.

“I think we’re going to be going to a higher pressure economy. If this pandemic drags on and the variants are problematic and we can’t reopen the economy, we might get a worse outcome than the Fed is projecting,” Gagnon said.

He added: “On the other hand, if the vaccines really do work, I think we could get a better outcome than the Fed is forecasting and is not really willing to show yet.”