Germany has bucked Europe’s pandemic-driven “baby bust” as the number of births in the region’s largest economy increased slightly in December and January from a year ago, according to preliminary figures published on Friday.

While many other countries, including France, Italy and Spain, have reported sharp falls in the number of children born in December and January — nine months after the Covid-19 pandemic first struck — Germany seems to have shrugged off the crisis.

Germany’s federal statistical office said “an initial evaluation” of regional birth registrations showed about 182,000 children were born in December and January, an increase of 0.8 per cent from the same period a year earlier.

However, Europe’s demographic challenges were underlined by new data showing that Italy lost the equivalent of the population of Florence in 2020 as more people died than in any year since the second world war and the birth rate hit its lowest level for over a century.

Meanwhile, France’s national statistics agency said the pandemic “may have discouraged couples from procreating, prompting them to postpone their parenting plans for several months” after births dropped 5 per cent year on year in February, following even bigger falls in December and January.

Marchel Alexandrovich, senior European economist at Jefferies, said it could be “at least another 12 to 18 months” before Europe’s birth rate recovers to pre-pandemic levels.

Women and younger people have been the worst affected by the economic fallout from the pandemic. Alexandrovich warned that “fertility rates will not necessarily see a full rebound”, adding: “If the economic circumstances of these groups have been permanently damaged . . . the financial cost of having a child may simply prove beyond reach.”

Data from Italy’s national statistics office on Friday showed the population shrank almost 400,000 last year as the pandemic exacerbated long-running demographic trends that pose a threat to Italy’s economy. Deaths outstripped births by 342,000 and a slowdown in immigration exacerbated the demographic decline.

Italy has long had a low birth rate, but the statistics office said the decline in births was steeper in the final two months of last year, suggesting the pandemic was an extra drag.

There are signs that some northern European countries have either been unaffected or may have experienced the opposite trend. For instance, Finland reversed years of decline with a slight year-on-year rise in babies born in January, while birth rates in Sweden and Norway were little changed in December. 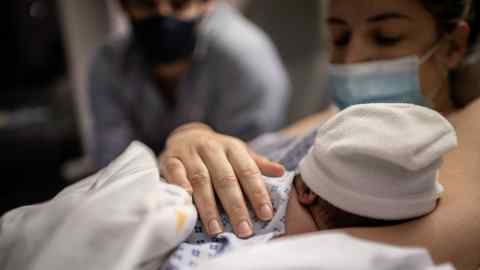 In Germany, the increase in births in December and January was concentrated in the wealthier western regions of the country, where 1.7 per cent more births were registered than in the same month the previous year, while there was a 3.8 per cent fall in eastern Germany, including Berlin.

“At the moment we don’t see a clear picture of what the impact of the pandemic will be on birth rates in Germany, but maybe Kurzarbeit played a stabilising role,” she said.

More generous childcare and parental leave policies have been credited for helping to boost the German fertility rate from 1.33 children per woman in 2007 to 1.57 a decade later — slightly above the EU average. But the rate has slipped again in the past couple of years.

A sharp drop in immigration in the first six months of last year meant that Germany’s population shrank for the first time in a decade, raising concerns about productivity, growth and public finances in future years.

The European Commission forecast in a recent report that the eurozone’s working-age population would be 8 per cent smaller by 2040, while the proportion of people aged over 65 would rise from 21 per cent in 2019 to 30 per cent in 2050.

Italy, Spain, Greece and Portugal are forecast to have the biggest increases in the proportion of people aged over 65.