Hong Kong has suspended administering BioNTech’s Covid-19 inoculation, in a move that threatens to further slow the pace of the city’s sluggish vaccine rollout and delay the easing of travel restrictions.

Macau, the Chinese territory near Hong Kong, also halted its BioNTech vaccine drive, citing packaging defects with a batch of the shot distributed in both cities by Fosun Pharma.

The Hong Kong government said the defects were related to the caps that closed the vial bottles.

“BioNTech and Fosun Pharma have no reason to believe that product safety is at risk,” both governments said on Wednesday, adding that “to be cautious”, vaccinations of the batch would be suspended pending an investigation.

Hong Kong’s free inoculation programme, which offers the public a choice between BioNTech’s shot and a jab manufactured by Chinese company Sinovac, has been handicapped by widespread vaccine hesitancy.

This has partly been stoked by distrust towards Chinese-manufactured products. Many Hong Kongers also feel there is less urgency to be inoculated given the city’s success in controlling the virus.

Hong Kong’s economy has been battered by the 2019 anti-government protests and the pandemic, and a speedy vaccine rollout was viewed as the city’s best chance to reopen to business travellers and tourists.

The government has enforced a conservative quarantine approach after mainland Chinese authorities demanded the city report a near-zero case count before allowing cross-border travel to be exempted from quarantine.

International business chambers have lobbied unsuccessfully for a partial relaxation of these restrictions, which include a strict 21-day hotel isolation period for incoming residents.

The announcement of the vaccine suspension immediately hit stocks in the territory, with the Hang Seng index falling 2.1 per cent on Wednesday. Fosun International’s Hong Kong-listed shares were down 3.3 per cent.

By Wednesday, about 150,200 people had received the BioNTech vaccine in Hong Kong and 252,800 had taken the Sinovac shot, out of a population of 7.5m. 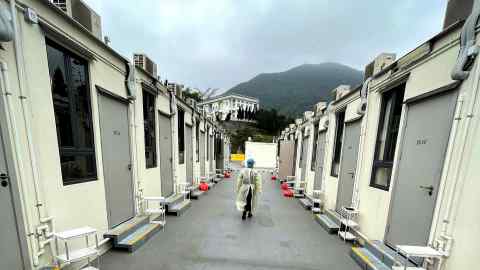 The same 210102 batch was also being distributed in Macau, and both territories’ governments said they made the decision to halt vaccinations after receiving written notice from Fosun.

William Chui, president of The Society of Hospital Pharmacists of Hong Kong, said that some aluminium vaccine seals were loosened. But it was unlikely the doses already distributed had been contaminated, he added, because they were also closed with rubber stoppers and it was usual practice to set aside those with loosened seals.

Siddharth Sridhar, a virologist at Hong Kong university, said experts were waiting for further information from the company, but that the defect was unlikely to lead to a decrease in the efficacy of the shots.

Fosun said the flaw only affected a small number of vials.