Emmanuel Macron’s rightwing interior minister is unapologetic about his crackdown on Islamists in France. But his campaign is aimed not only at curbing homegrown extremism, he says — it is also a political project to defeat far-right leader Marine Le Pen in next year’s elections.

Gérald Darmanin, whose planned new law against Islamist “separatism” is aimed at bolstering France’s secular republican values, has been accused of Islamophobia and pandering to the far right after suggesting Le Pen was “softer than we could ever be” in a recent television debate.

But in an interview with the Financial Times, 38-year-old Darmanin was unrepentant about tackling sensitive issues such as immigration and Islamist radicalism. The danger for France, he argued, was “to let Madame Le Pen become president of the republic because we’ve shown ourselves to be too naive, too soft”.

“There are between 60 and 70 per cent of French people who say there is too much immigration in France, that Islam is not compatible with the republic, that there could be civil war,” said Darmanin.

“When 47 per cent of people are ready to vote for [Le Pen], you have two solutions. Either you call them all idiots — but if you insult people, it’s rare they end up voting for you — or you try to understand what they’re going through.”

I’m here to do politics. I’m not going to be happy in a country where every year Madame Le Pen takes more votes

An Elabe opinion poll for BFMTV published on Thursday showed 58 per cent of voters agreed with Le Pen on at least some issues some of the time, while 48 per cent thought her likely or certain to win in 2022.

Le Pen reached the second and final round of the 2017 presidential election, only to lose to Macron by 66 per cent to 34 per cent following a disastrous television debate performance.

Now, with surveys showing her within a whisker of winning the presidency next year, Darmanin insisted it was best to engage with Le Pen head on about immigration and Islamism while pointing out her weakness on other crucial issues such as the economy and the EU.

“The people who vote Front National [the former name of Le Pen’s Rassemblement National] . . . may think Madame Le Pen is right about immigration, but they say to themselves that she is useless on the economy,” said the interior minister.

Darmanin’s grandfather was a Harki — an Algerian who fought for France in the former French colony’s 1954-62 war of independence — and his middle name is Moussa. His father ran a bar and his mother was a cleaning lady — all of which makes him an advertisement for France’s attempt to assimilate immigrants from its former north African colonies.

“I have an aunt called Fatima and aunt called Saada, and there’s not an ounce of racism in the things I say,” he said.

He entered conservative politics at the age of 16, joining the Gaullist Rassemblement pour la République. He became a protégé of former president Nicolas Sarkozy and in 2012 was elected mayor of the northern French town of Tourcoing, not far from the tough suburb of Valenciennes where he was born.

Macron appointed him budget minister before parachuting him into the interior ministry last year as the authorities grappled with the tail-end of the gilets jaunes anti-government protests. He then chose Darmanin to lead a crackdown on Islamist radicals accused of taking control of Muslim-dominated French suburbs and imposing their way of life — including dress codes for women — and of fomenting terror attacks such as the beheading of schoolteacher Samuel Paty last year.

While lauded by conservatives and police unions, Darmanin — who has even complained about “communitarian” supermarket shelves of halal or kosher food — has become a divisive figure in France. He has faced calls to resign over a rape allegation, which he denies; on Friday he was called as a witness in the ongoing case. He has also been heavily criticised by some on the left and by some Muslim leaders for his handling of the fight against extremism.

The new law includes measures to ban “virginity certificates” for Muslim women, curb home schooling and extend a public sector ban on religious clothing, such as veils, to private contractors working for the state. The text does not use the words “Islamist” or “separatist” and is called the law “to protect the principles of the republic”, but Macron and his ministers have said their aim is to rein in Islamist extremism.

Darmanin said he had already closed 17 mosques accused of promoting extremism and four clandestine schools and wanted the legislation, which is still being debated in parliament, to break down what he called “the atmosphere of separatism . . . the atmosphere that encourages people to commit [terrorist] acts”.

But the law has triggered accusations that Macron and Darmanin are stigmatising France’s estimated 5.7m Muslims.

Darmanin accepted that Muslims were often among the most socially disadvantaged people in the country but defended the vigorous pursuit of uncompromising laïcité, or secularism, as a way of binding disparate groups together into a nation, even if it took decades, as it did with Protestants and Jews in a republican and once predominantly Catholic country.

“It will take 50 years or a century, but [Muslims], like the Catholics, like the Jews, like the Protestants, will assimilate, provided we don’t lower our guard,” he said. 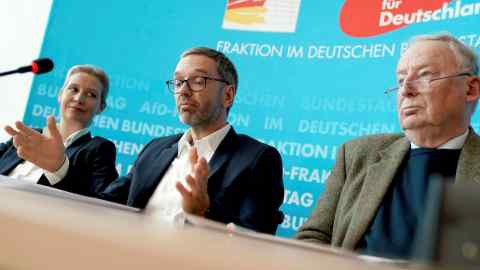 The political danger for Macron and Darmanin is that their courting of the right will alienate leftwing voters. That could destroy the traditional “republican front”, under which voters bite their tongues and vote for a candidate they dislike in order to keep another out in a second-round run-off, as they did with Le Pen and her father Jean-Marie Le Pen before her.

For Darmanin, accommodating the sensitivities of the left rather than tackling immigration and Islamism head on has allowed Le Pen’s popularity to increase.

His goal, he said, was to avert the kind of “crisis of authority” in countries from Donald Trump’s US and Brexit Britain to authoritarian states such as China, Russia and Turkey and the “instability” of the parliamentary democracies in Spain and Italy. “France is one of the only countries, along with Germany, not to have experienced this,” he said.

Asked whether France might finally succumb to the populist wave if Le Pen won in 2022, he said: “That’s what we’re here to prevent.”

“I’m here to do politics,” he added, facing a large electoral map of France propped against the wall of his ministerial office across the road from the Elysée Palace. “I’m not going to be happy in a country where every year Madame Le Pen takes more votes.”