Rescuers have warned that the Suez Canal could remain blocked by a grounded giant container ship for “weeks”, raising fears of significant disruption to global trade.

As dredgers arrived on Thursday to help dig out the 220,000-tonne Ever Given after it became wedged across the canal during a sandstorm on Tuesday, Boskalis, a salvage company involved in the rescue, likened the operation to trying to free a beached whale.

“The more secure the ship is, the longer an operation will take,” Boskalis chief executive Peter Berdowski told the Netherlands’ Nieuwsuur television programme. “It can take days to weeks. Bringing in all the equipment we need, that’s not around the corner.”

The Ever Given is one of the world’s largest container ships, owned by Taiwan-based Evergreen, and is weighed down by hundreds of thousands of tonnes of cargo, with its position suggesting its bow and stern are wedged on the shallower banks of the canal edge at the southern end.

About 100 ships are stuck either side of the canal waiting to pass through.

John Glen, an economist at the Chartered Institute of Procurement & Supply said on Thursday that a prolonged shutdown of the canal risked severe disruption to supply chains in the UK and elsewhere.

“If goods have to be rerouted via Africa due to the blockage this could add as much as 10 days to delivery times for UK businesses,” Glen said. “If this does happen it will inevitably lead to shortages of goods and inflationary price rises for consumers.”

In normal times the Suez Canal handles more than 10 per cent of global seaborne trade and a similar amount of petroleum shipments, as the fastest sea route between Europe and Asia.

Oil prices have been supported by the blockage as long lines of tankers at either end of the canal have lined up waiting for the container ship to be cleared. Brent crude, the international benchmark, has risen by almost 5 per cent to about $63 a barrel since the canal closed. 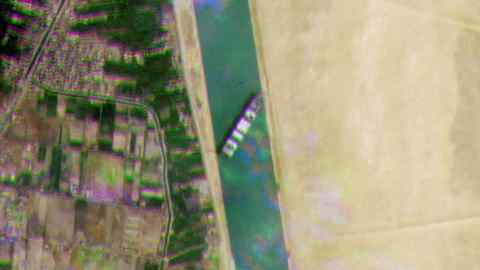 Wood Mackenzie, an energy consultancy, said that while the largest impact was on container shipping — which made up about 50 per cent of the vessels transiting the canal in February — at least 16 laden crude oil and refined fuel tankers had been held up.

The Suez Canal Authority indicated on Thursday that its own expectations for refloating the vessel had been extended.

The SCA said it had let 13 vessels traverse the northern end of the canal on Wednesday “according to projections of the time of the completion of the flotation works”, but that those vessels would now need to drop anchor in the Bitter Lakes area of the canal, the SAC said, with all further navigation now suspended.