US and Chinese officials engaged in a fiery exchange at the start of their first-high level meeting since Joe Biden took office in January, signalling that the two powers will struggle to find common ground.

Antony Blinken, US secretary of state, accused China of undermining global stability with its actions towards Hong Kong, Xinjiang and Taiwan at the two-day event in Anchorage, Alaska.

“Each of these actions threaten the rules-based order that maintains global stability,” Blinken said in his opening statement, according to Reuters. “The alternative to a rules-based order is a . . . far more violent and unstable world.”

Sitting across from Yang Jiechi, his Chinese counterpart, Blinken added that the US would also raise concerns about cyber attacks and economic coercion.

Yang fired back by accusing the US of having a “cold war mentality” and saying it used its military and financial clout to “suppress” other nations and to “incite some countries to attack China”.

In a blistering response to Blinken — who has accused China of committing “genocide” with its repression of 1m Uyghurs in Xinjiang — Yang said many Americans no longer had confidence in their own democracy because of the treatment of minorities and the incidents of racism over recent years. He described his own rebuke as extraordinary but said he was responding to Blinken’s statement which was not “normal”.

“The Chinese government clearly feels it doesn’t need to adhere to long-established standards,” she said. “It feels it has the upper hand and it also doesn’t mind being seen as violating written and unwritten rules. That’s very dangerous.”

US officials had suggested that the meeting would be tough and they would stress that the Biden administration had no intention of pulling its punches when it came to issues such as human rights and democracy.

Yang and Wang came to Alaska hoping for a reset in relations, but the US had emphasised that it was not interested in engaging China just for the sake of dialogue, and that it wanted to see “deeds, not words” from Beijing.

While expectations had been low, the unusually blunt start, made in front of journalists after Blinken asked reporters to remain to hear his response to Yang, suggested that relations could plummet further. 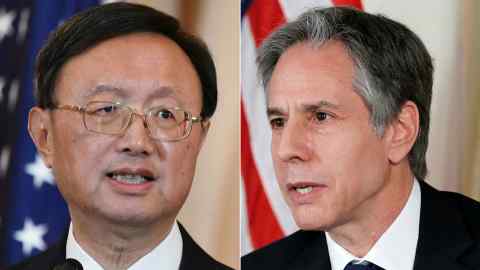 In a recent speech, Yang blamed the Trump administration for the dismal state of relations, which are at their lowest point in four decades, and expressed hope for some improvement in ties.

But he also warned the Biden administration not to cross any “red lines”, in a reference to criticisms about China’s crackdown on the pro-democracy movement in Hong Kong, human rights abuses in Xinjiang and aggressive Chinese military activity in the air and waters surrounding Taiwan.

Biden and his top officials have repeatedly ignored the Chinese warnings. Two days before the Alaska meeting, Washington imposed sanctions on 24 Chinese and Hong Kong officials over the recent passage of a law that eviscerates the little democracy enjoyed in the territory by reducing the number of lawmakers directly elected by the population.