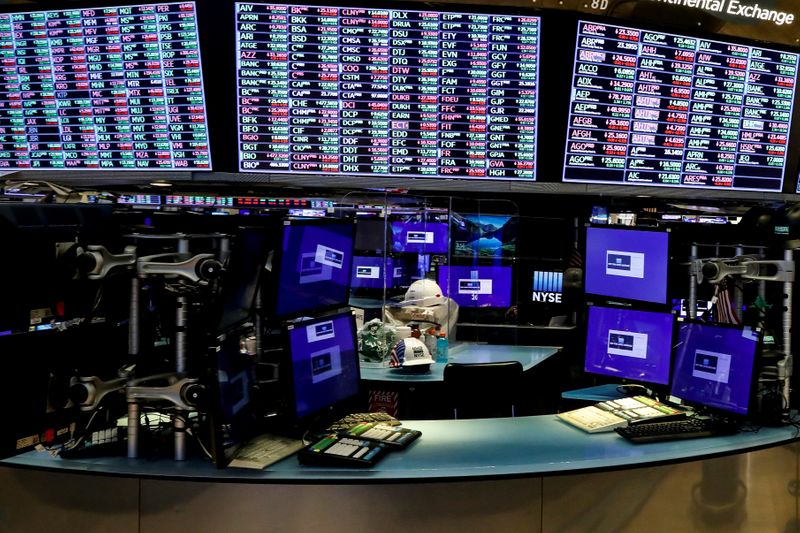 © Reuters. FILE PHOTO: Dividers are seen inside a trading post on the trading floor as preparations are made for the return to trading at the NYSE in New York

LONDON (Reuters) – It’s a year since COVID-19 mayhem sent the reeling 12% for its second-worst day ever, yet the bull market born from that selloff has in the subsequent 12 months added more than $40 trillion to the value of world stocks.

On March 16, 2020, when the S&P 500 endured its worst one-day fall since the “Black Monday” of October 1987, MSCI’s global equity index plunged almost 10%, only to rise back thanks to huge central bank support.

Effects have rippled out to every market sector. Here is a look at markets that day and in the year since:

THE $65 TRILLION ROUND TRIP

As COVID-19 spread around the world between late February and the end of March 2020, triggering unprecedented lockdowns, world stocks saw their market value collapse by $21 trillion. Markets troughed on March 23, then claimed a record high five months later.

The market capitalisation of the MSCI global index has risen $40 trillion between March 23 and now, making it a $65 trillion round-trip.

The new bull market has progressed in phases, however.

During the “hope” period, between March and November, healthcare and technology stocks soared at the expense of financials, airlines and others hit by contracting economies and travel bans. The two sectors now comprise 42% of global equity market capitalisation compared with one-third before the pandemic hit.

Graphic: One year since the worst market cap loss – https://fingfx.thomsonreuters.com/gfx/buzz/xklvyrzzqpg/Pasted%20image%201615628255160.png

It led to the biggest gap in pricing since the 1990s dotcom bubble between such “growth” stocks and the cheaper sectors whose fortunes hinge on economic recovery.

But this year as COVID-19 vaccinations kicked off, value has gained ground — tech shares are flat year-to-date, while the “old economy” has risen 7%.

March 16 saw yields on 10-year Treasuries tumble. The shock came a day later as managers of multi-asset portfolios, scrabbling to make up equity losses, turned to selling their most liquid assets — government bonds.

At one point on March 17, 10-year U.S. yields jumped over 20 basis points, followed by selloffs in British gilts and German Bunds. It was the moment that shook investors’ faith in bonds as portfolio diversifiers.

It was a period of intense volatility — the average daily move between the highest and lowest price on Bund futures was 186 ticks last March, triple February levels and one of the biggest moves on record, according to Refinitiv data.

The average yield on the Bloomberg Barclays (LON:) multi-verse bond index meanwhile fell more than 100 bps between a peak in March and a low in August. Since then it has risen around 55 bps to its highest levels in almost a year.

The $6.6 trillion-a-day currency markets saw some of the most striking moves as the U.S. dollar soared nearly 8% between March 9-20.

Almost every other currency slumped. While emerging currencies were hit hardest — the Mexican peso plunged 18% — even perceived havens such as the yen and Swiss franc plunged 6% to 8% as dollar shortages rippled across global money markets.

The dollar’s fortunes turned on March 19 as Fed action eased the shortages and eliminated the dollar’s interest rate advantage. By the end of the year, it had fallen 13% from the March peaks.

Graphic: Anatomy of a Crisis – https://graphics.reuters.com/CURRENCIES-PERFORMANCE/yzdpxergjvx/chart.png