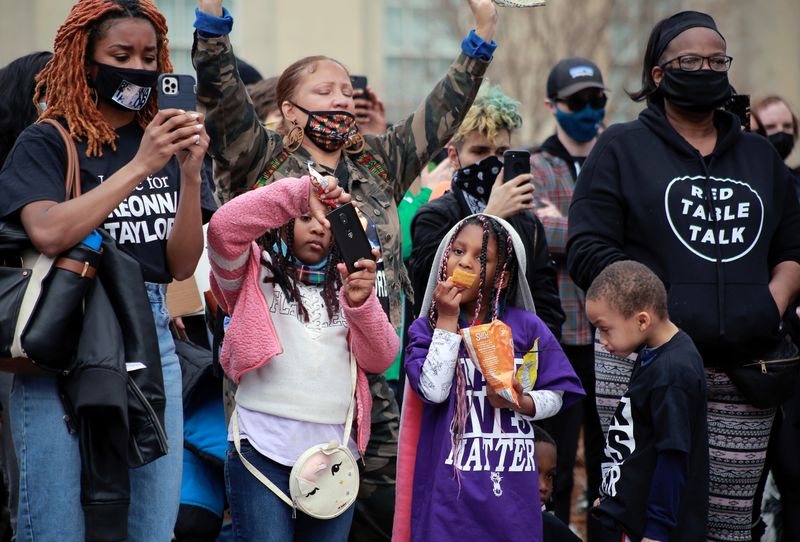 © Reuters. Rally to mark one year since Breonna Taylor was shot and killed by police, in Louisville

LOUISVILLE, Ky. (Reuters) – Hundreds of demonstrators gathered for a rally and march in Louisville, Kentucky, on Saturday to mark the one-year anniversary of the killing of Breonna Taylor, whose death helped fuel U.S. protests against police brutality.

Taylor, a Black 26-year-old emergency medical technician and aspiring nurse, was shot six times and killed by police in her Louisville home during a botched raid on March 13, 2020.

A grand jury in September recommended no homicide charges against the three white officers in the case. One of the officers, Brett Hankison, was charged with three counts of wanton endangerment for firing into a neighbor’s apartment, and a juror said later those charges were the only ones brought to the grand jury by Kentucky Attorney General Daniel Cameron.

Hankison and two other officers were fired by the police department.

The incident, along with the police killing in May of George Floyd in Minnesota, sparked demonstrations against racism and excessive use of force by law enforcement across the nation last summer.

During Saturday’s rally in Louisville, speakers called for justice for Taylor and reforms to the criminal justice system.

“This is about our power to change this world for our children, for my daughter,” said Sadiqa Reynolds, president of the Louisville Urban League. “This is so we make sure that not another person dies at the hands of the police.”

“They dropped the charges against me, but that is not where we finish,” he said, referring to charges that were filed and later dismissed against him for shooting at the police officers during the incident. “We got to keep going. Keep going.”

Louisville Mayor Greg Fisher said his city has made significant reforms in policies and priorities, but that there was still “a good deal of work ahead.”

Taylor’s “death resonates still in our city and around the world, underscoring the need to reform systems and act more urgently to advance racial justice and equity,” he said on Twitter.

Walker filed a federal lawsuit against the police department on Friday, one of his lawyers said. It alleges that the officers violated Walker’s civil rights by conducting an unlawful search and using excessive force. A police department spokesman could not be reached for comment.

Protests were held in other cities across the United States on Saturday to mark Taylor’s death, including in Atlanta and New York. President Joe Biden said on Twitter that he remains committed to signing a police reform bill into law.

“Breonna Taylor’s death was a tragedy, a blow to her family, her community, and America. As we continue to mourn her, we must press ahead to pass meaningful police reform in Congress,” he wrote.