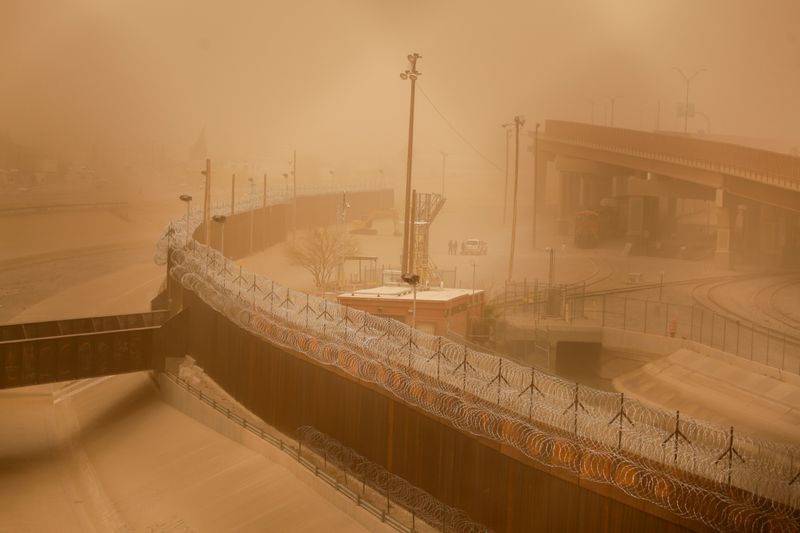 © Reuters. A general view shows a section of the border wall in El Paso, Texas, U.S., during a sandstorm, as seen from Ciudad Juarez

By Chris Kahn and David Morgan

NEW YORK (Reuters) – Republican voters in the United States are increasingly hostile toward illegal immigrants, Reuters/Ipsos polling shows, an unease that the Republican Party is moving to capitalize on in its bid to retake Congress.

The poll findings, based on surveys conducted before and after Donald Trump’s presidency, show that Republicans are becoming more unified around the former president’s hardline views on immigration, even as the rest of the country has become more welcoming.

Seventy-seven percent of Republicans said in a Feb. 18-24 poll that they want more fencing along the southern border with Mexico, up six points from 2015. And 56% do not want illegal immigrants to have a path to citizenship, which is up 18 percentage points from a 2018 survey.

Republicans are increasingly expressing deep concerns about immigration as waves of unaccompanied children and families continue to show up at the U.S.-Mexico border.

Twenty-two percent of Republicans said in a March 10-11 poll they consider immigration to be the nation’s most important problem, up from 7% who said so in early February.

Republicans are trying to reinvigorate supporters after losing both the White House and the Senate in last November’s election. They, however, are fractured between Trump loyalists and those who want to move on and make the party more electable.

Sticking to a tough line on immigration carries risks for the party as U.S. demographics change and minorities gain political influence.

The importance of the border issue for Republicans was on display this week in El Paso, Texas, where visiting House of Representatives Republican leader Kevin McCarthy blamed President Joe Biden for a rise in border arrivals.

“The security of our nation and our border is first and foremost the responsibility of our president,” McCarthy said, describing the current migrant influx as “a Biden border crisis.”

White House spokeswoman Jen Psaki on Monday said the Biden administration was trying to work through a “dismantled and unprepared system” left behind by Trump. “It’s going to take some time, but we are very clear-eyed about what the problems are and very focused on putting forward solutions,” she said.

On Tuesday, she told reporters the White House welcomed input from McCarthy or others who had “solutions and wants to be a part of working to address what we all know is a challenging situation at the border.”

In its efforts to pursue what it says is a more humane system, the Biden administration has relaxed certain policies – moves that have been accompanied by a growing number of illegal border crossers.

U.S. officials have been scrambling to find additional shelters to house unaccompanied children and speed up their releases to family members or other sponsors already in the United States.

Republican leaders have signaled that they intend to use immigration in congressional districts, especially along the border, to help turn out the votes of party loyalists and conservative independents in congressional elections next year.

Party officials hope the border issue will also counter Biden’s promotion of the new COVID-19 relief bill and call into question his commitment to national security, and law and order.

“His failure to secure the border and take responsibility is harming the security of the American people. With Biden, it’s open borders but closed schools – clearly a mismanagement of priorities.” Republican National Committee Press Secretary Mandi Merritt said in a statement to Reuters.

A Republican strategist familiar with the leadership’s thinking told Reuters the party will focus its resources on a handful of House districts along the Mexican border that are currently occupied by Democrats. These include seats held by Henry Cuellar, Vicente Gonzalez and Filemon Vela in Texas, and Tom O’Halleran and Ann Kirkpatrick, who is retiring, in Arizona.

Biden appears to be on shakier ground with his approach to immigration among independents, a crucial voting group, than he has been with his handling of the coronavirus and the economy, according to the poll.

The February survey found 50% of independents opposed allowing more asylum seekers into the country, while 34% supported doing so.

Similarly, 50% of all Americans said they did not want to increase the number of refugees allowed in the country, while only 39% supported doing so.

The Reuters/Ipsos polling showed that Republicans, who are calling for a return to Trump’s hardline policies, will need to tread carefully in deciding how hard to push an anti-immigration message in the next elections.

While Republicans have become more opposed to programs that would benefit immigrants who entered the country illegally, polling shows the rest of the country appears to be moving in the opposite direction.

For example, 61% of American adults support a path to citizenship for illegal immigrants in a Reuters/Ipsos February survey, which is up from 43% in a 2015 survey.

The number of Americans who do not want more fencing along the Mexican border has more than doubled over the past six years, and surveys conducted during Trump’s tenure in office shows a steady increase in support for policies that would ease restrictions on children who were brought over the border illegally.

An October 2020 poll showed that 63% now approve of policies to help so-called “Dreamers” remain in the country and obtain work permits, up from 46% in 2014.

“Certainly, there seems to be a good deal of evidence that an anti-immigration mindset turns off college-educated women in the suburbs and younger voters,” said Whit Ayres, a Republican consultant and pollster. “So there is a cost to demonizing a segment of the population.”

The strategy also has not always worked.

In the lead-up to 2018’s midterm elections, Trump warned the about a caravan of Central American migrants who were headed north to escape violence and poverty in their countries. Vilifying the migrants as criminals and potential terrorists, Trump said his party was the only one that would defend the nation.

His warnings did not sway the elections, handing the Democrats control of the House for the first time in nearly a decade in what was seen as a repudiation of Trump.

Still, some Democrats do not appear interested in waiting to see if they can again survive being painted as a party that wants to open the border.

Texas Congressman Gonzalez, a Democrat who is being targeted by Republicans, has been advocating for remedies that Republican have supported, like giving migrants incentives to seek asylum in other countries

“What we need is a plan in place that doesn’t incentivize people to make this very dangerous trek,” Gonzalez told CNN on Sunday.