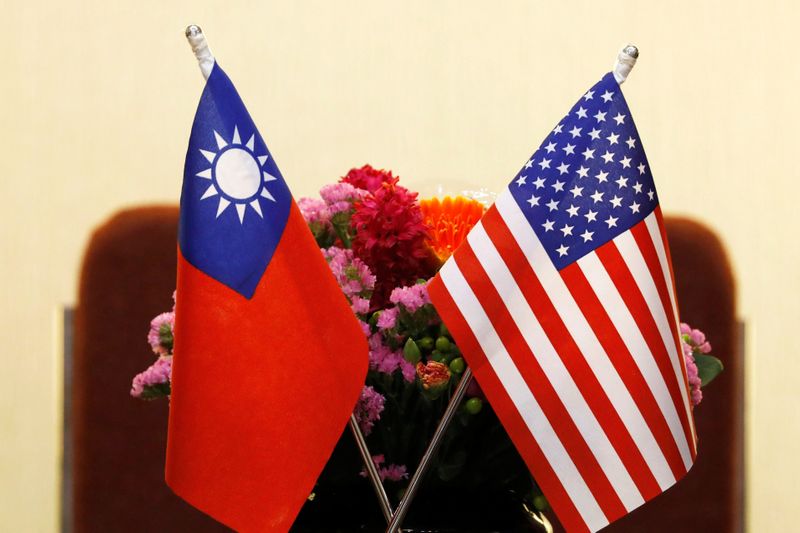 © Reuters. Flags of Taiwan and U.S. are placed for a meeting between U.S. House Foreign Affairs Committee Chairman Ed Royce speaks and with Su Chia-chyuan, President of the Legislative Yuan in Taipei

TAIPEI (Reuters) -Taiwan and the United States have signed their first agreement under the Biden administration, establishing a Coast Guard Working Group to coordinate policy, following China’s passing of a law that allows its coast guard to fire on foreign vessels.

The new government of U.S. President Joe Biden has moved to reassure Chinese-claimed Taiwan that its commitment to the island is rock solid.

The defacto Taiwanese ambassador to the United States, Hsiao Bi-khim, signed the agreement in Washington on Thursday, her office said in a statement.

“It is our hope that with the new Coast Guard Working Group, both sides will forge a stronger partnership and jointly contribute even more to a free and open Indo-Pacific region.”

U.S. Acting Assistant Secretary of State for East Asian and Pacific Affairs Sung Kim was at the signing ceremony, the office said.

The American Institute in Taiwan, which handles U.S. ties with the island, said the United States supported “Taiwan’s meaningful participation and contributions to issues of global concern, including in maritime security and safety”.

Taiwan is upgrading its coast guard with new ships, which can be drafted into naval service in the event of war, as the island deals with increasing encroachments from Chinese fishing boats and sand dredgers in Taiwan-controlled waters.

While the United States, like most countries, has no formal diplomatic ties with Taiwan, it is the island’s most important international backer and arms supplier.

China passed a law in January that for the first time explicitly allows its coast guard to fire on foreign vessels, causing concern regionally and in Washington. China has rebuffed those worries.

Taiwan Premier Su Tseng-chang said on Friday China’s new law had shocked the region and that those with “common values” needed to work together to protect peace.

“This unilateral request for the coast guard to use force will cause great tension and pressure on neighbouring countries,” he told reporters.

China also has maritime sovereignty disputes with Japan in the East China Sea and with several Southeast Asian countries in the South China Sea.