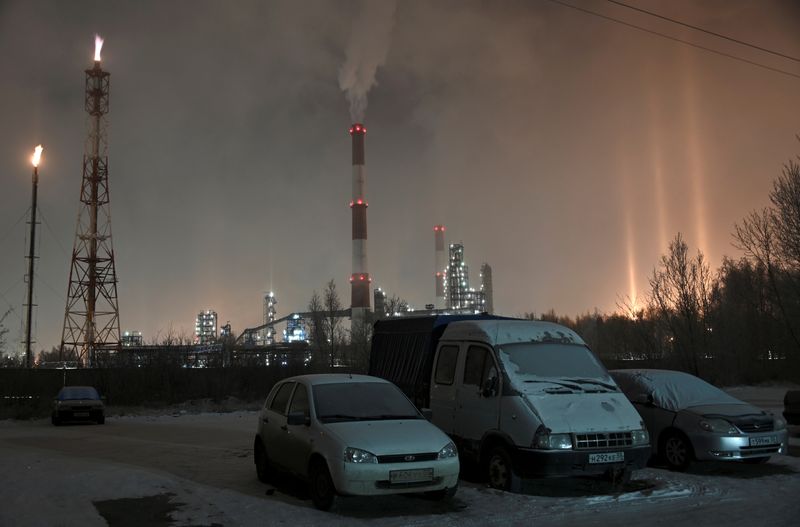 © Reuters. FILE PHOTO: Vehicles covered with snow and hoarfrost are parked near a local oil refinery in Omsk

Russia’s commodity-dependent economy is on track to grow this year after shrinking 3.1% in 2020 — its sharpest contraction in 11 years but still smaller than expected.

The central bank expects the economy to return to pre-crisis levels before the end of the year, the governor of the central bank, Elvira Nabiullina, said on Friday after a surprise 25-basis-point rate increase, brought about by rising inflation and geopolitical risks.

The Federal Statistics Service, or Rosstat, said Russia’s real wages, which are adjusted for inflation and reported one month later than other key indicators, rose 0.1% year-on-year in January. Analysts on average had forecast they would remain flat.

Economic growth and a recovery in living standards in Russia are a crucial issue for President Vladimir Putin and the United Russian ruling party. The latter is bracing for parliamentary elections in September amid massive protests that rocked Russian streets earlier this year.

Russia’s jobless rate slipped to 5.7% in February from 5.8% in January, in line with the forecast in a Reuters poll of analysts.

Retail sales, a barometer of consumer demand that is Russia’s main driver of economic growth, underperformed, slipping 1.3% year-on-year in February versus expectations for a 1.1% drop predicted by a Reuters poll.